the history of a happy find

Thanks to a series of fortunate circumstances, abetted by the tenacity of Dr Tatiana Berford, correspondent in Novgorod of the Istituto di Studi Paganiniani in Genoa, and later of Dr Philippe Xavier Borer of Boudry (Switzerland) on a communication by Dr Maria Prestia Sanfilippo (the former director of the Ufficio Promozione Città Turismo e Spettacolo), a series of finds from Paganini’s day have recently been discovered in Genoa.

These finds (1) consist of a violin bridge, two bows (one broken at various points) (2), a box of rosin made by Vuillaume (3), and a roll of gut strings in a reasonable state of preservation (4). 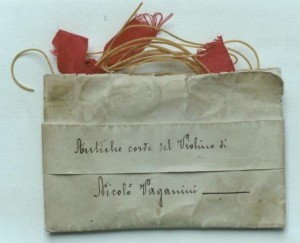 It on this last item that our attention is focused. For it is one of the rare instance of gut string samples that can be dated with some certainty: in this case to the early decades of the 19th century. The material I inspected is preserved in an envelope that had already been opened by its discoverers. It bears the stationer’s stamp of the “Cartoleria Rubartelli Genova”, has a seal of red sealing wax showing the symbol of the City of Genoa and a manuscript inscription in black ink: “Antiche corde del Violino di Nicolò Paganini”.

I measured the string gauges with a micrometer, and also calculated the degree of twist given to each sample during the manufacturing stage: a highly important parameter for assessing the acoustic yield of any gut string. It would also be very interesting to assess the number of guts used to make the various strings. But the “strands” could be separated with the required delicacy and counted only by specially hydrating some small fragments of the strings. Unfortunately this operation is not advised, because items of such antiquity could easily dissolve completely in the watery solution; in any case, the technique is in itself destructive

As Edward Neill has pointed out (5), in some of his letters Paganini already provided interesting information about the strings he used: “Ho bisogno di un favore: ponetevi tutta la cura, e la diligenza. Mi mancano i cantini. Io li desidero sottilissimi […] . Quantunque tanto sottili devono essere di 4 fila per resistere. Badate che la corda sia liscia, uguale, e ben tirata […] . Vi supplico di sorvegliare i fabbricanti e di far presto e bene.” (I need a favour: to be done with care and solicitude. I am without chanterelles […]. Even if they are very thin they must be made of four strands to endure. Make sure the string is smooth, even and well stretched […] . I beg you to keep an eye on the makers and do this soon and well). And in a letter written from Naples to his friend and confidant Germi, shortly before, on 29 May 1829, we read: “Il tuo Paganini desidera sapere […] quanti mazzi di cantini e quanto di seconde, e a quante fila si desiderano da Napoli, perché ora si avvicina il mese di Agosto, epoca giusta per fabbricar le corde” (Your friend Paganini wants to know […] how many bundles of chanterelles and how many of second strings, and with how many strands, are wanted from Naples, because the month of August is approaching: the right time for making strings) (6).

Further information is provided by Carl Flesch (7): “Some thirty years ago the owner of the Schott firm showed the celebrated violinist Hugo Hermann one of Paganini’s letters, wherein the latter begged the head of the firm at the time to procure strings for him like the samples enclosed. Hermann obtained the loan of these strings. After measuring them on a string-gauge, he found to his astonishment that the D-string had the strength of the A-string used today and the A-string the thickness of our E-string, and that the latter was not unlike a strong thread”.

In an earlier paper (8) I suggested that these strings were in actual fact guitar strings, given that Paganini was also a brilliant guitarist. But this conjecture needs revising in the light of recent research I have done on the contemporary guitar. In brief, the study shows that the guitar made use of violin strings for the first three strings: in other words, it didn’t use thin gauges at all, as is commonly believed today.

Flesch’s information is in any case insufficient to offer any certainty on the matter. First, it is not clear whether the notes (D, A, etc.) associated with each sample were actually named by Paganini himself, or whether that was what Hermann imagined (in which case Paganini might have merely enclosed the string samples without specifying either their notes or the instrument they were needed for). Second, we must remember that Paganini also played the mandolin (9), so it is quite possible that the strings ordered were for this instrument. And finally, we cannot exclude the possibility that his request was merely a favour on behalf of some musical acquaintance.

In any case, if we disregard the thinnest string (for which we have no term of comparison) and compare Hermann’s specifications with the table of tensions given by Gorge Hart towards the end of the 19th century (10), we may estimate the presumed “D” as circa 0.84¸0.90 mm and the presumed “A” as 0.65¸0.73 mm: diameters that are decidedly thin for any violin of the time.

About the presumed “E”, we frankly cannot say, since Hermann merely tells us that it “was not unlike a strong thread”. Was it perhaps a chanterelle for the mandolin? There is no way of telling.

The strings recently found can be assumed to be two “Ds”, three “As” and two “Es”: it would seem likely that they are segments taken from longer lengths and cut to size for the violin. They are straw-yellow in colour, fragile, slightly wrinkly and intact (i.e. never used). The “E” strings have a medium twist (ca. 45° angle), while the “A” and “D” strings have a decidedly high twist (close to 80°). We can well imagine, therefore, this guaranteed excellent acoustic results, in certain respects different from that of strings today, which are often much less twisted and hence stiffer.

Below are the diameter ranges found over all the samples:

* this measurement was found on only one segment of string

As we notice, there is no fourth string. This, however, is hardly surprising, because it was customary at the time for the fourth string to be made not by string makers but by instrument makers (if not by the musicians themselves), using a fairly thin second string (11) (12) (13).

What is altogether surprising, on the other hand, is how remarkably close the calibres of the above table are particularly to those of Andrea Ruffini, the famous Neapolitan string-maker of the late 19th-century (despite some uncertainty over the final diameter, owing to the fact that the strings were smoothed exclusively by hand and the thickness of the original material was in any case variable, no matter how well selected the gut) (14):

And they also agree with the data given a hundred years earlier by Count Riccati (15):

However, this shouldn’t come as a surprise if we remember that in Italy – from the 17th century, or even earlier (16) – the string were produced preferably from whole guts of lamb (and not ram, which is the male of sheep and) – which in Italy seems not to have been as “popular” as it was in France) of 8¸9 months of age, according to a practice that was strictly standardised and handed down from father to son. As reported in both Italian and other sources (17), the making of a violin chanterelle generally required three “strands” (i.e. guts), but sometimes even four. We find this both in the 18th and late 19th centuries (18). The fact of using four strands doesn’t necessarily imply that the chanterelles were particularly thick (if with three guts the diameter is ca. 0.70 mm, with four it would be ca. 0.82 mm -), but merely that there were times when the gut available to the string maker was a little thinner than usual. This is also confirmed by a passage from one of Paganini’s letters (19). And as a string-maker myself, I can affirm that, final diameters being equal, a string made of four thin guts is much more regular and durable and also truer than one made of three “standard” guts.
Paganini evidently knew what he was doing when he ordered the strings: he specially asked for canterelles of four strands (which would enhance the durability and limit the number of false strings) and he even went to the length of asking a trusted person to keep an eye on the Neapolitan string makers.
If we consider that the diameters measured agree almost entirely with those of numerous other contemporary sources, and if we also remember that manufacturing was considerably standardised, I think we can rule out the possibility that the individual items shrank as a consequence of further drying. Besides, a finished gut string is already in itself what one might call a “mummified” material.

The following graph superimposes onto Graph 2 of my previous paper (8, p 187) the scaling of tensions of the average diameters of the E, A and D strings under the same working conditions (vibrating length 0,33 cms; a’=435 Hz): 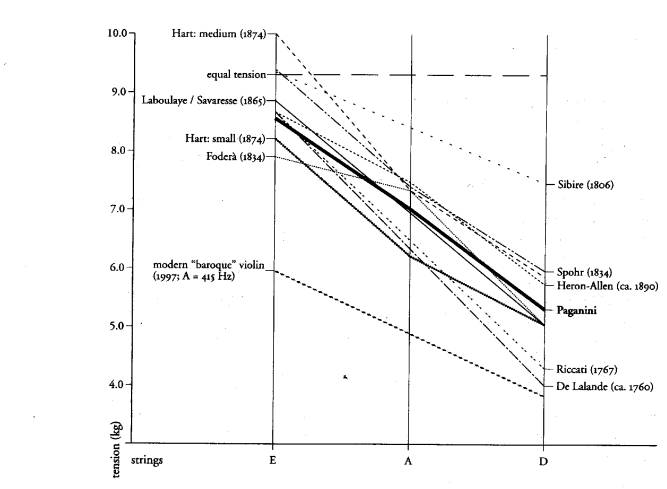 One observes that the working tensions of the string samples present an almost perfectly progressive profile, exactly as one would expect and as is consistent with the surviving historical information.

Regardless of whether or not the strings in question actually belonged to the great violinist, in all likelihood they are the only surviving exemplars that certainly date to the early 19th century. In agreement with the studies carried out on the subject, they once again refute the deeply-rooted opinion that the stringing of violins was then much lighter than it is today. In addition, the strings were subjected to a judicious degree of twisting. Though this was less pronounced on the chanterelles (which thus gained in resistance to tension and fraying), there was a high degree of twist on the second and, above all, third strings, which worked
only at a fraction of their breaking load and needed as much elasticity as possible to yield the best acoustic results. These finds seem to document that Paganini also used strings with diameters customary for his day. Though we do not know for certain that they were made in Naples, they were undoubtedly made skilfully. There is some doubt, however, about the meaning of the request in his letter (“I want them to be very thin”), which seems to contradict the other statement that he wants the strings to be “of four strands to endure”.
Finally, we cannot exclude the possibility that, in the course of his career, even Paganini (like any other musician today, for that matter) indulged in a little experimentation with different calibres on the only material available, which he also considered as the best: Neapolitan gut.

(1) The material was found and is still preserved at the Archivio di “Palazzo Rosso” in Genoa.
(2) Attached to the bow in question is a sheet of paper bearing the following note: “Arco di Nicolò Paganini, che adoperò durante tutta la sua carriera artistica. Rottosi l’arco a Newcastel [sic] (Inghilterra) in otto frantumi. Lo fece rimettere insieme dal celebre liutista [sic] Vuillaume di Parigi, ne cercò di valersi di quest arco esclusivamente. In attestato di verità Achille Paganini figlio di Nicolò” (Bow of Nicolò Paganini, which he used throughout his artistic career. The bow broke into eight bits in Newcastle (England). He had it put together by the famous lutenist [sic] Vuillaume of Paris, and tried to make exclusive use of this bow. In attestation of the truth, Achille Paganini, Nicolò’s son).
(3) The following is written on the cardboard back of the box: “Vuillaume, rue…..Paris.”
(4) The strings are all rolled up and bound tightly together by three small ribbons of red silk.